Trinity Winchester, in association with B-eat, are delighted to be able to offer a training day for Family and Friends who care for somebody with an Eating Disorder. 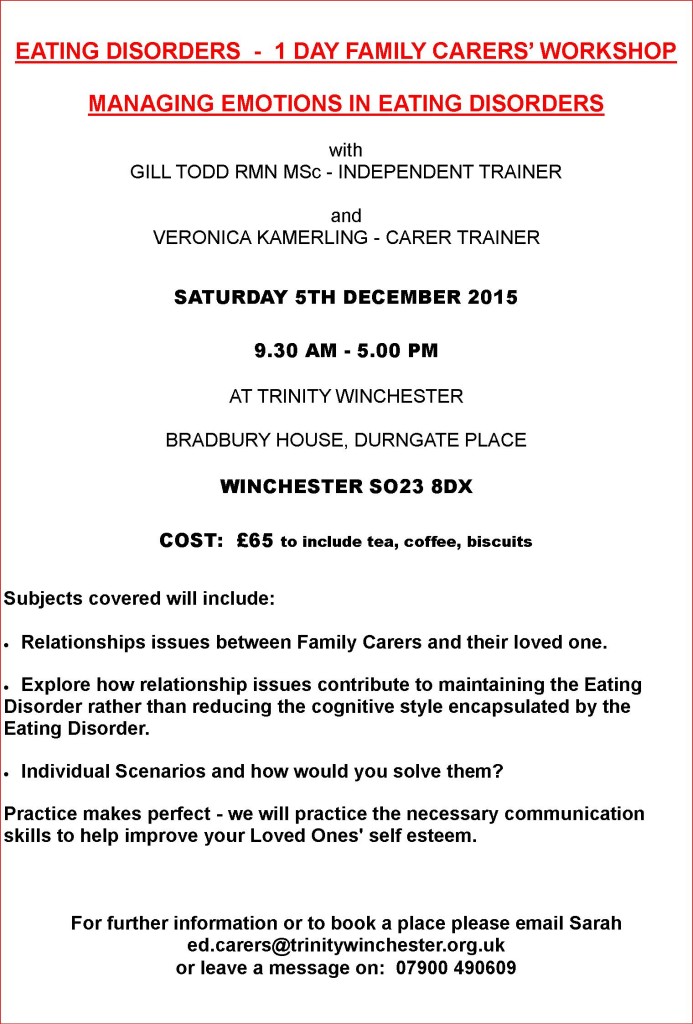 Praise for the course:

“Having previously attended a workshop with Veronica and Gill, I have no hesitation in recommending this training day to other carers. It has given me confidence and the skills to help in our continued caring for our Daughter. She herself expressed her appreciation recently of us taking the time to attend the workshop and that it has certainly helped her. It is also an opportunity to talk to others in a similar situation which is reassuring and helpful”

“An amazing day. I learnt how to respond to my daughter in a calm more measured way which opens up positive dialogue. I thoroughly recommend it.”

Drew has grown up in Winchester, but in his mid-twenties started to have difficulties at home, resulting in him leaving aged 25. With nowhere secure to go, Drew stayed in a tent at a local campsite, where he was first told about Trinity Winchester’s services. Feeling at a very low point, Drew began attending Trinity regularly for support, washing facilities and hot meals.

END_OF_DOCUMENT_TOKEN_TO_BE_REPLACED

“In 2007 I was diagnosed with Schizophrenia and was very unwell for several years. My life became very isolated and I had withdrawn from society. As part of my recovery programme I was introduced to Trinity where I began to attend an art class. END_OF_DOCUMENT_TOKEN_TO_BE_REPLACED

“I came to Trinity at the end of September 2014 in need of support after living rough for over a year. I have had mental ill health for a long time including depression, anxiety and personality disorder, and everything got on top of me.

Trinity has been more than helpful to me over the last year. END_OF_DOCUMENT_TOKEN_TO_BE_REPLACED