Our strategy sets out our plans for the next five years and focuses on five strategic goals to meet our challenges. By the end of this period we will:

Our detailed operational plans underpin each goal and will be communicated across the organisation so that our staff, volunteers and stakeholders clearly understand our vision, values, goals and measures. 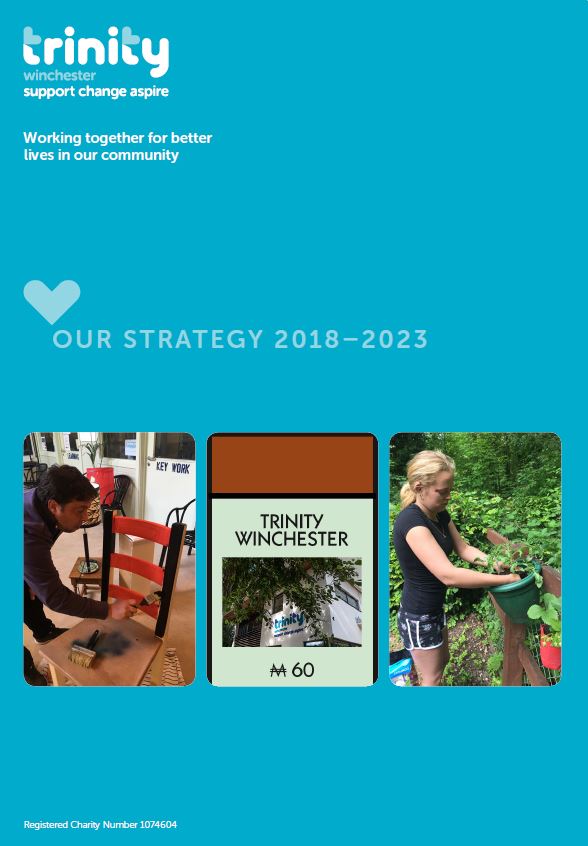 The Trinity Centre was founded in 1986 as a drop-in centre to provide advice and support to socially deprived people in Winchester. It was originally housed in premises in Holy Trinity Church, then the grounds of Winchester Cathedral, and subsequently progressed via premises in Romsey Road, Winchester to a converted church hall in St. Paul’s Hill in 1995. These premises were purchased out-right following a successful fundraising campaign which realised some £160,000.

Originally constituted as a charity, Trinity also became a company limited by guarantee in 1999. Trinity further developed its services, extended opening times and by the early 2000s it had become clear that the St. Paul’s Hill premises were too small and no longer suitable for the number of service users and the expanded services provided.

From 2003 to 2006 Trinity was contracted to provide a well-respected Tier 2 Drug Service from premises in Bridge Street, Winchester. The service (named Rupert’s after a Trinity service user who tragically died from an overdose) was highly valued and successfully met the needs of this vulnerable community.

Following several years of planning and a further successful fundraising campaign, Trinity’s main drop-in services moved to new, purpose-built premises in Bradbury House, Durngate Place, Winchester in May 2009, where we are based today.

While the relocation project was in full swing, Trinity changed its name to Trinity Winchester in 2005 (recognising that services were being delivered from more than one ‘centre’) and developed two further services. One, the Women’s Service, was opened in 2006 in the Bridge Street premises and has since gone from strength to strength.

In addition, Trinity set up and developed a drop-in centre at The Camrose Centre, Vine Road, Basingstoke. The service in Basingstoke was modelled on that successfully operating in Winchester.

Following the fundraising campaign for the new premises, the realities of the economic downturn in 2009 caused the Trustees to look seriously at future revenue funding streams. Steps were taken to reduce operating costs by consolidating the Women’s Service into Bradbury House, stopping our involvement in the Camrose Centre, and reducing staffing numbers within the organisation.