Trinity are delighted to announce a life-changing donation of £500,000, from the DEFLOG VQ Trust. It’s an incredibly generous sum which will enable us to expand and develop our work at a time when demand for our services is increasing and funding is becoming more difficult to secure. 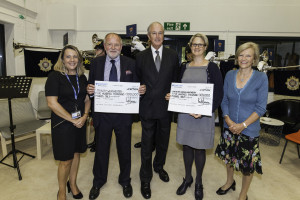 Winchester Churches Nightshelter also received the same amount from the military charity – the DEFLOG VQ Trust. The charity is closing as the Army will be taking over its role educating logistics personnel more directly. The charity has a link with Winchester as the Army’s Royal Logistic Corps is moving next year to new barracks being built at Worthy Down.

The Trust was the brainchild of retired Brigadier Tom Blyth whose son Ben suffered a complicated and incurable mental health condition which eventually led to his death in 2010 at the age of 33. After many years struggling to find his place in the world, Ben eventually made himself homeless, at first in London and later in Winchester.  He was a regular at Trinity for many years and a much loved and well known young man amongst the homeless population. Ben’s father paid tribute to the work of the Trinity Winchester and other organisations working in Winchester. “After the harsh years on the streets in London he found help, care and compassion from the many charities that so distinguish Winchester as a place of Christian Charity, including the Nightshelter and the Trinity Centre.”

Ben’s death shocked and saddened many of us working with people experiencing homelessness in Winchester. He was a lovely young man whose gentleness and kindness touched so many of us who worked with him. His story shows how homelessness really can happen to anyone as we all know, and that sometimes severe mental illness puts people beyond the reach of even the strongest ties of family love and support.  We remember Ben at Trinity with his name and inscription “Gentle Giant” on one of our memorial benches in our garden.

Trinity are astonished to receive this donation, which will be used to enhance our services and hopefully lead to other projects to help our clients in the future.