Charity Skydivers to give back to Trinity Winchester

Two brave women are set to perform a hair-raising skydive to raise money for Trinity Winchester, the charity which has helped them both greatly and transformed their lives, in the face of tragedy and adversity. 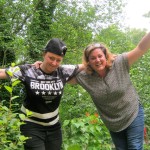 Louise and Katie will take part in a tandem skydive from 10,000 feet. They will reach speeds of up to 125 mph as they freefall for approximately 30 seconds, facing their fears to raise as much money as they can for Trinity.

Although Katie and Louise have had very different experiences in life, they have both been supported by Trinity Winchester’s services for homeless and vulnerable people.

Katie first accessed Trinity in 2013 when her tenancy was at risk and her mental health was poor. She said: “I came in and spoke to the staff here about what was going on in my life, how I was feeling, and that the house I was staying in wasn’t very good. They talked me through exactly how they could help me and what would happen moving forward. I walked out of there feeling the happiest I had been in a long time.”

After losing her accommodation, Katie and her best friend Abi were left without a home to call their own. “I don’t know what we would have eaten if it wasn’t for Trinity. We would have been starving. Thankfully we never had to sleep outside, always found a friend’s sofa or floor to crash on, but my benefits had stopped because all the mail was going to the old address. We came to Trinity to eat, we played ping pong, took part in cookery classes, IT lessons, and I accessed the counselling service there.”

In 2015, Abi tragically and suddenly passed away and Katie’s world fell apart. Her mental health deteriorated and she tried to take her own life. Thankfully, there were a number of support agencies in place who supported Katie through this horrible time.

Katie continued: “It was hard to come back to Trinity as Abi and I had so many happy memories here, but now I don’t know where I would be without it. Abi and I had always planned to do a skydive together this summer, but now I will be doing this challenge in memory of her. I have chosen to raise money for Trinity because they were so good to us for the months when we didn’t have a home to call our own or much money, and now I want to give something back.”

Louise is doing this skydive for Trinity to raise awareness of the service the charity provides for women who have been victims of domestic abuse. Louise said: “I lived in fear of my husband every day throughout our marriage. One day I just packed everything that I could into the car and left, but he wouldn’t leave me alone. I went to the police to report him, and they referred me to Trinity. Through doing the domestic abuse course, I have been able to look back on our marriage and unravel what was going on inside my husband, and what the triggers were. I don’t trust anyone enough to get married again, but I now know what to look for in a relationship and read the signs.”

The staff at Trinity Women’s Service have helped with Louise’s legal troubles, as well as providing ongoing 1:1 counselling. She is now free from her abuser, but the effects of his actions are likely to affect the rest of her life.

She added: “I was listening to the radio and they were discussing the abuse storyline happening on The Archers at the moment. I thought that there are probably people listening who need help. So I phoned in, and shared my experiences and told people to contact Trinity if they needed help. If there is one person that I can help, then that is my job done. I don’t know what my outcome would have been if I hadn’t come to Trinity. It is really good to be able to give something back, and raise awareness of their vital service.”

Both women have online fundraising pages, and are aiming to raise as much as possible for Trinity Winchester, which provides support to a range of vulnerable people. If you would like to support their challenge, please visit the below links, or contact Trinity on 01962 842827.

Lou is now studying for a degree, working in a job she enjoys, has a new partner and is enjoying the freedom that she lacked for 25 years. Katie is planning to save up and go travelling. “Life is for living.”