Trinity Winchester is set to receive a grant of £4,500 from the Denplan Community Fund to pay for gas and electricity costs for the drop in day centre, women’s service and early morning outreach programme for 6 months. Trinity works with over 600 people every year from their base at Bradbury House in central Winchester, through a wide range of services for homeless and other vulnerable people.

Sue McKenna, Operations Director at Trinity, said “Knowing that six months of necessary bills are covered by this wonderfully generous grant means that our team can focus on providing high quality services to some of the most vulnerable people in the city. The gas and electricity power the showers and washing machines which are used throughout the day by people who are sleeping rough, the IT suite for people job hunting and on the learning programme, the kitchen where over 50 meals are prepared daily, as well as cups of tea, lighting and heating in the women’s service. Donations such as these are vital in the continuation of Trinity’s services, thank you to the team and fund for chosing to support our work.”

Deborah Edwards, Co-ordinator of the Denplan Community Fund, said “The fund exists to help those less able to support themselves, with a focus on health and wellbeing. We have been proud to support Trinity over a number of years, and are delighted to be able to sustain such a fundamental part of their service.”

Denplan (now known as Simplyhealth Professionals) and Trinity have a history of working together, including previous sponsorship for fundraising events, taking part in the Big Sleep Out 2013, and former Chief Dental Officer Roger Matthews’ incredible accomplishment of fundraising over £1,000 in one day as part of the unique fundraising event “Bail Me Out”. 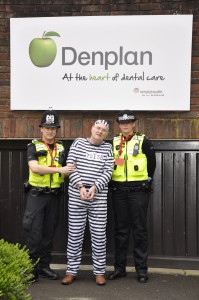 Roger Matthews taking part in “Bail Me Out” 2013