Local company get their paint brushes out 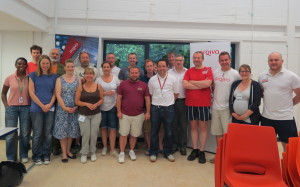 Earlier this month, a group of 22 volunteers from Arqiva came to Trinity to re-decorate the building, as part of their Community Challenge Month.

The team had quite a challenge ahead of them, painting our main hall, accessible bathroom, hallway, quiet room, women’s service and exterior metal work in just one day. Our building hasn’t been painted since we moved in six years ago, so there was plenty to do.

Before: white walls, not so white anymore 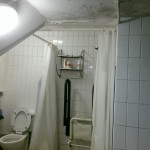 Before: mould lines the ceiling of the shower room

After a quick introduction to our work, the team got straight down to business, sanding and painting the wood and metal work, and getting the first coat of white emulsion on the walls.

The team worked incredibly hard all day, stopping only briefly for lunch, when Michelle (Director of Strategy and Fundraising) and Sue (General Manager) told the group more about the work that we do and the type of people that we help.

“It’s only when you become involved at this sort of level that you appreciate how bad, or widespread, the issues are. Actually being in the same building as some of those being supported really brings home the scope of it all.” David Challis – Project Manager, Arqiva 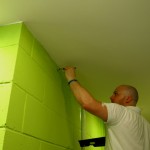 Adding some colour to the Women’s Service 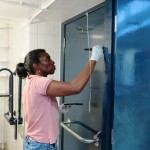 Brightening up the shower room

Hard at work in the main hall

After lunch, the team got back to the decorating. Before last week, all our walls were white, with navy blue woodwork, however, some of our walls have been crying out for some colour. So a nice lime green was chosen for one of the walls in the quiet room and the waiting room in the women’s service. This has not only brightened the room, but also made it feel more inviting, encouraging people to relax and open up more easily.

Not only did the team re-decorate our building, but they also had time to add some plaques to our memory bench of service users who have sadly passed away. Staff and service users alike have been noticing the difference at Trinity.

“Having the building redecorated by Arqiva has instantly brightened the hall, and some of our service users have commented on how good it looks.  Introducing colour into some of the rooms has also been a popular decision, with the Women’s Service now a warmer, more welcoming environment.  It is important for our service users to be able to relax when they are here, and having a newly painted building has helped with this.” – Hannah Scott – Senior Project Worker, Trinity

Since returning to the office, and their normal day to day lives, many of the team have decided that they would like to support Trinity and will be joining our running team or coming along to some of our dining events later in the year.

“Trinity has to raise half of its running costs through donations or events, so being able to contribute in this way provides a means of helping them out without impacting their funds. Several forthcoming fundraising events were mentioned, and as two of them involve eating, how could you not turn them down!” David Challis – Project Manager, Arqiva 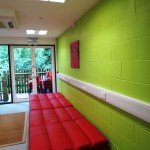 The transforming effect of green in the quiet room 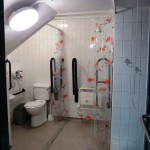 A new life given to the disabled shower room 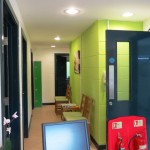 Brightened up in the Women’s Service

If you would like to see how your company can help, get in touch with Jenny on jenny@trinitywinchester.org.uk.