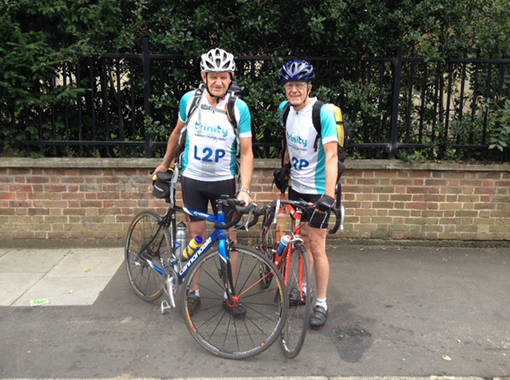 Gerry O’Keefe tells us about his epic cycle to Paris…

Departed Wimbledon a little after 12 and headed off to south coast. There are four quite serious climbs on the way and combined with a lumpy newhaven it made for quite a demanding day. We finished in Newhaven about 4.30 and both had tired legs. However, spirits were revived by an excellent Italian meal.

Off to the Ferry at a little after 8 and joined another 50 cyclists for the crossing. Weather was fairly warm and crossing uneventful. We set off about 3.30 and completed a further 55 miles to Gournay en Bray. The first 30 miles were unusual as they were on a disused rail track which has been converted in to a very well kept cycleway. The track had a road crossing every km, complete with a small house which, in times past, was obviously the gatekeepers house. The last 25 miles were through rolling French countryside which was gorgeous in the late afternoon sunshine. The hotel specialised in taking English cyclists and was hosted by a very hospitable french hotelier. After a couple of extremely refreshing beers we enjoyed an excellent meal.

From Gournay to Paris. We set off early as the mist was rising from the fields creating an almost mystical scene. The day warmed up quickly and was at 25° for most of the time. The first 50 miles were through undulating, exposed countryside which had apparently empty villages every few kms. There was an excellent 2 km descent in to Triel on Seine which was the cycling highlight of the trip. We abandoned the original route in to Paris as it was much too detailed and hard to follow, opting instead for a more direct route. However, the route was much busier and as it was then Friday night rush hour we spent the next few hours battling the Parisian traffic. We arrived at the Arc de Triomphe at about 6.30 with sufficient light to take the iconic photos. On then to our accommodation (a converted monastery) on the edge of the Marais. Because of the distance and the heat we were quite tired by the time we arrived.  a couple of thirst quenching beers and an excellent celebratory dinner fully restored normality.

After breakfast we took our bikes and bags up to the Gare du Nord. As luck would have it I got a puncture within 200 metres of the station! After a relaxing Parisian day, we caught the Eurostar back to London arriving early evening.