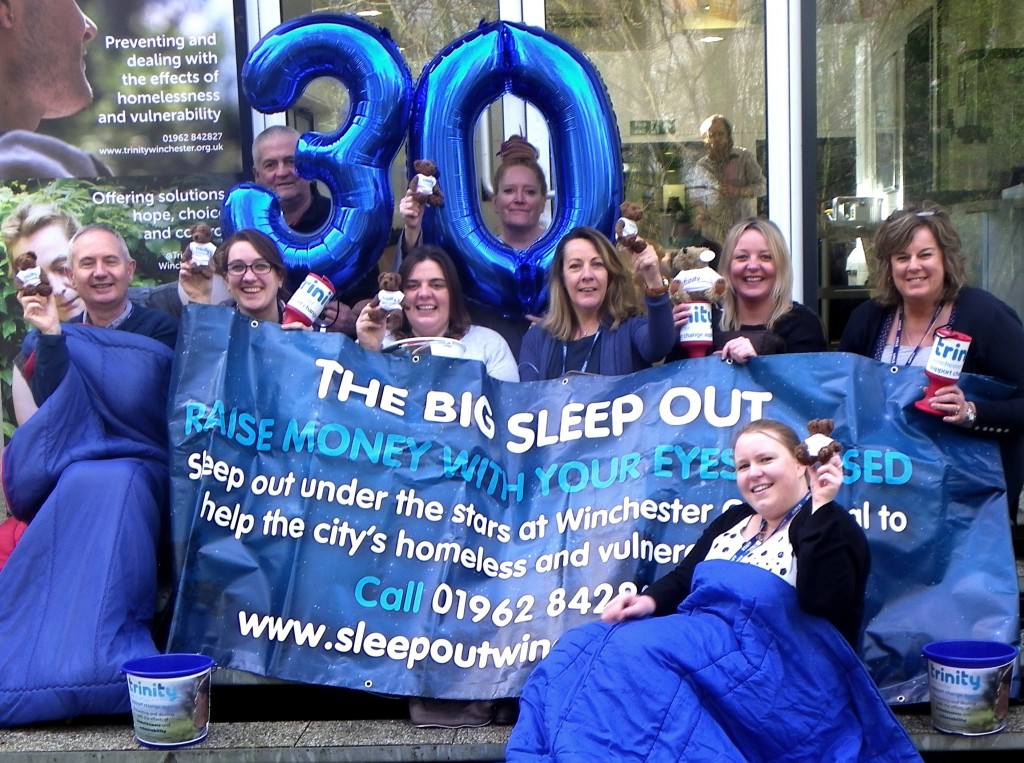 Leading Winchester homelessness charity, Trinity Winchester, has launched the Big Sleep Out 2016 which will take place again this year in the Inner Close of Winchester Cathedral. The event on 6th May will be the first major fundraiser of Trinity Winchester’s 30th anniversary and the charity has much planned to mark this prestigious celebratory year.

Last year’s Big Sleep Out, which saw 150 people attend during the evening, and 77 sleepers, raised over £21,000 and Trinity plans to do even better this year. It is hoped that hundreds of local people and businesses will take part in the challenge to raise money for people who are homeless or vulnerable.

Since Trinity Winchester was formed in 1986, the charity has supported more than 10,000 people by offering emotional and practical support, helping to prevent people becoming homeless and empowering people to make positive changes.

One such person who has been helped by Trinity is Jamie who had a high powered job, and was married with two children. But within a six week period, he was made redundant, his wife left him, his brother was diagnosed with cancer and he lost his best friend in a motorbike accident. This led to a deterioration in his mental health, he became unable to maintain his accommodation and soon he was sleeping rough. Jamie was diagnosed with depression and made several suicide attempts during this time. Following his discharge from a psychiatric hospital, Jamie started visiting Trinity Winchester where he received specialist counselling and support to help him find accommodation. He has now moved into a permanent home and is retraining as a mental health practitioner. Jamie said: “Without Trinity’s help, I can’t imagine where I would be. I owe them my life and I couldn’t be more grateful.”

Michelle Gardner, Director of Strategy and Fundraising at Trinity Winchester said: “Jamie’s story, and many others like it, show how vital our work is. Unless you’ve slept out you’ll never be able to comprehend how difficult, frightening and demeaning it is, and that’s why The Big Sleep Out is such an important event. We not only aim to raise significant money, but also get people thinking about the horrors of being homeless or otherwise vulnerable.”

For further information about the event, or to register, please visit www.sleepoutwinchester.co.uk or email the event organiser at sleepout@trinitywinchester.org.uk or call the team on 01962 842827.